Architectural Digest recently made a selection of the best designers and get to know their own relax space: the living room! A designer can often be their own client too (and a tough one!). The house of a designer is their own space of creativity. It always has a little bit of personality, glamour, and talent. This is a place where they are free to work! So, to inspire you with the best interior designers inspirations (their houses), here you have amazing living rooms from amazing designers. Ready?

The Timothy’s Paris apartment is actually a window aligned with two mirrors, one in the living room and one in the dining room beyond. Corrigan highlighted the ingenious hall-of-mirrors illusion by installing matching Napoléon III chandeliers in the two rooms. The armchairs and the curtain and sofa fabrics are all from Schumacher’s Timothy Corrigan Collection; the stools are vintage Jansen, and the carpet is a Corrigan design for Patterson Flynn Martin.

The heart of designer Allegra Hicks’s apartment in Naples, Italy, is a long, high-ceilinged room divided into living and dining areas. The designer also created the Roman-shade fabric, the cut velvet on the wood-framed Jindrich Halabala armchairs, and the butterfly specimen table at right; an 18th-century Venetian mirror surmounts the mantel

The slipper chairs in the living room of Celerie Kemble’s Dominican Republic retreat are from the designer’s line for Henredon.

A painting by Andro Wekua hangs between the windows in the living/dining room at Sara Story’s family compound in Texas. 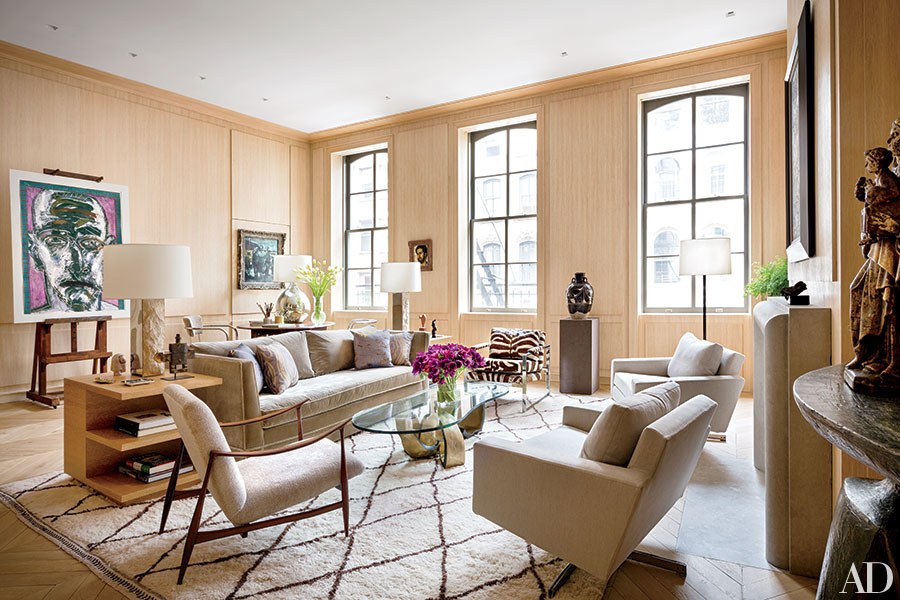 In the living room at the Mexico retreat of Andrew Fisher and Jeffry Weisman, pine beams highlight the ceiling, and the French doors feature curtains of a Duralee velvet trimmed with an ikat by Kravet.

At the Manhattan home of designers, this living room’s 1960s American club chairs are upholstered in an Edelman suede, the mirror and woven chair is midcentury French, the marble mantel and pair of lamps are 19th century, and the kilim is from ABC Carpet & Home. Stunning!

At the Long Island home of the designers, these living room lines and colors create a perfect and peaceful place.

You can visit DelightFULL’s Inspirations Page as well as our Pinterest boards in order to get more inspirations.
Get more ideas for your projects and find functional, stylish and sizable lighting and furniture choices.