Zaha Hadid became the first woman to receive the Pritzker Architecture Prize (2004). She also received the Stirling Prize in 2010 and 2011. Today, we’ll explore one of her best design projects!

In 2012, she was honored a Dame Commander of the Order of the British Empire and in 2015, she became the first woman to be awarded the RIBA Gold Medal in her own right.
In 2016, Zaha Hadid was the recipient of the Royal Gold Medal for architecture, marking the first time a woman has won the prize in her own right. Sadly, on 31 March 2016, Hadid died of a heart attack in a Miami hospital, where she was being treated for bronchitis. Ms. Hadid was known for ambitious projects and startling forms. Her buildings are distinctively neo-futuristic, characterised by the “powerful, curving forms of her elongated structures” with “multiple perspective points and fragmented geometry to evoke the chaos of modern life”. Her audacity and creativity took her to the top level of architects in the world of design, scoring projects around the world.

“The atrium space has been carefully sculpted to offer panoramic views and the use of natural daylight,” says Satoshi Ohashi, director of Zaha Hadid Architects in China. “The sound will be controlled and engineered so that the building’s mechanical equipment, ventilation system, and elevators/elevator shafts that have a chimney effect are protected with insulation to reduce noise levels.”, he adds.

Leeza Soho Tower will offer more than one million square feet of office and residential space.There’s a subway tunnel that intersects the site, which the Tower mirrors with its two distinct volumes separated by a full-height atrium. Construction is already mid-way and Leeza Soho Tower has already 20 of its 46 floors!

The double-glass-walled atrium “twists” as it ascends, creating a unique view of the building’s two halves that offers staggering views of the surrounding city.

This was Zaha Hadid’s latest project before she passed, almost a year ago. It’ll definitely be a staggering example of how the architect changed conceptions and left her mark on the architecture world. Zaha Hadid Architects prioritized sustainability with features like a 3D BIM energy management system, high-efficiency pumps and fans, and low-flow water fixtures throughout.

There’s no doubt that Beijing’s skyline will become richer and fuller with Zaha Hadid Architect’s intervention. The financial district of China’s busy capital will gain a more magical charm. 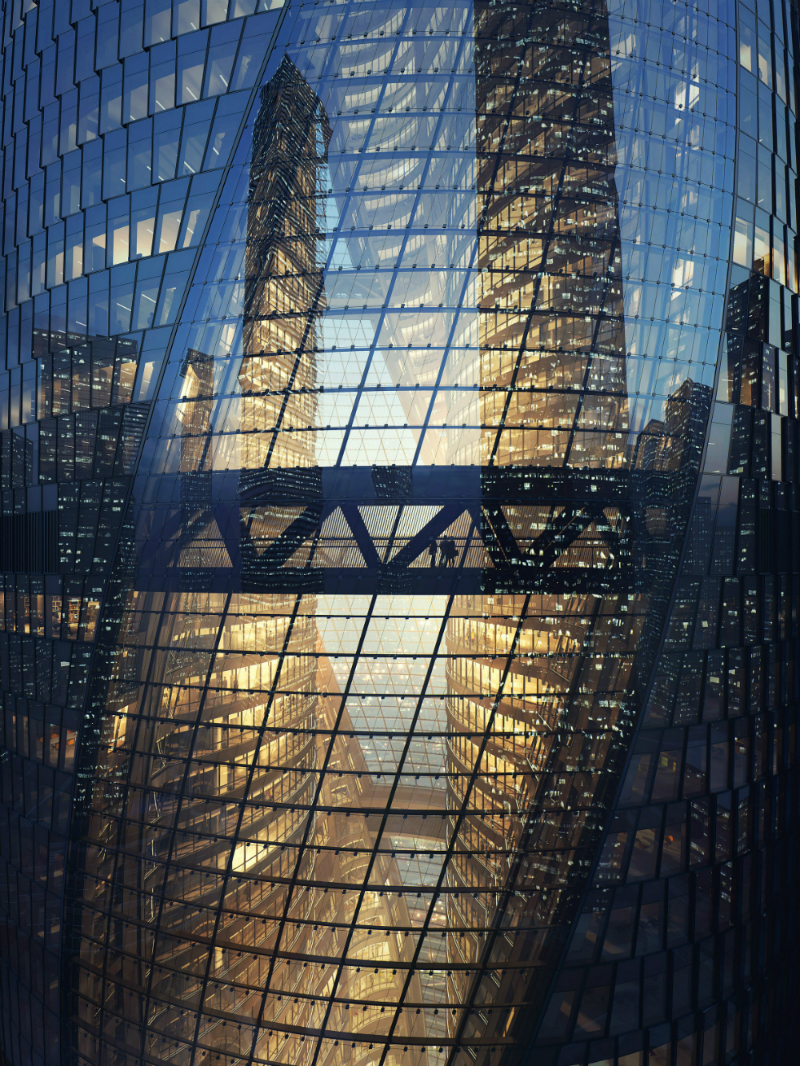 It’s expected that once finished, the 190-metre-high void will conquer the title of the world’s largest atrium – a title currently held by the Burj Al Arab hotel in Dubai.

We hope you liked our article about: Zaha Hadid Architects Designed What Will Be The World’s Largest Atrium

You can visit DelightFULL’s Inspirations Page as well as our Pinterest boards in order to get more inspirations. Get more ideas for your projects and find functional, stylish and sizable lighting and furniture choices.