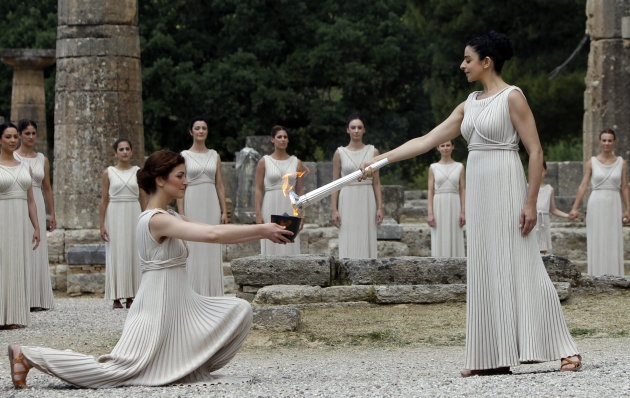 Olympic opening cerimony only happens on July 27, but the countdown to the London Olympics already began: it occured in the ancient Olympia, yesterday, with a singular cerimony where the Games torch was finally lit.

It was on a warm and sunny day that the  actress Ino Menegaki played the high priestess, appealing to sun God Apollo and igniting the torch at the ruins of the Temple of Hera, marking 78 days before the Games’ beggining.

In order to fill your curiosity you might want to know that the first torchbearer, Spyros Gianniotis, was a swimmer  who won the gold medal in the 10-km open water event at the 2011 world championship. The second torchbearer was 19-year-old Alexander Loukos, a Briton of Greek origin.

“With this ceremony we begin the final countdown to a dream that came to life seven years ago in Singapore, when London was selected to host the 2012 Games,” said International Olympic Committee (IOC) President Jacques Rogge in a brief speech.

These celebrations around  Olympic games show the mythological relevance that the event already has around the world.